The 2,877 square meter Digi-Tech factory brings together the college’s technology, engineering and design courses in one building, with robotics labs, digital studios, classrooms and support spaces.

In the spirit of industrial design, Coffey Architects used standard components for the building, including an exposed steel frame, composite panels and glass surrounded by a perforated aluminum shell.

The aluminum shell, which is raised one story on steel columns and away from the thermal envelope of the building, defines a covered outdoor plaza and terraces around the building.

The terraces lead to a large atrium, which is lit by skylights in the building’s jagged roof.

Around the atrium are the teaching spaces of Digi-Tech Factory, which overlook the surrounding campus through windows that shatter the perforated screen. Some windows are covered with panels to create a play of light and shade during the day and silhouettes at night.

“The manipulation of light is a central principle of [our] design practice, often explored, as here, by the use of an external screen to provide light, texture, variation and environmental control, ”the studio explained.

“In this case, the building panels play with both nature and artificial light depending on the time of day,” he continued. “During the day, natural light is diffused through the panels inwards, and at night, the light from the spaces inside the building activates the facade.” 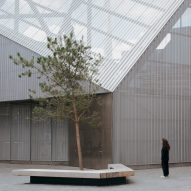 Voids on each floor and internal windows running the entire height allow light to flow through the atrium and create visual connections between spaces.

“As you move to the upper floors, the sensations of light and airiness continue despite a small footprint, achieved through a combination of skylights in the roof at each end of the hallways and moments of light. double-height spaces on each floor. Added the studio.

Wide internal corridors, as well as the covered spaces surrounding the building, have been designed to promote socialization between classes.

The glazed ground floor extends into a corrugated iron laboratory block at the rear of the building, which sinks into and overlooks a gently sloping garden.

Continuing the industrial theme, the structure and services of Digi-Tech Factory have been left on display indoors, allowing students and staff to see how the building operates while creating flexibility for any future additions or modifications.

The white of the exterior extends to the metal frame and interior walls, contrasting with the doors marked in bright yellow.

Coffey Architects was founded in London in 2005 by architect Phil Coffey. The studio used a similar approach playing with light and texture at King’s Cross, where they designed a three-story office building clad in perforated aluminum panels.